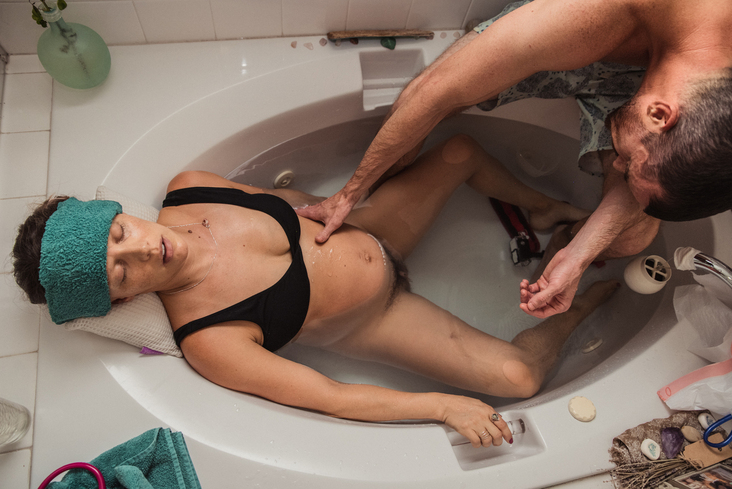 Women have birthed their babies at home since the beginning of time, never wondering: Is Homebirth Safe?

When the concept of hospitalization during child labor was not yet the norm, we were used to homebirth as the normal way of giving birth.

While hospitals were created to aid the sick and infirm since the ancient Greeks and Romans, they were never designed as a place of birth, because ultimately birth was not seen as a medical condition that needed a cure.

In Europe and United States, it was mostly around the 70s and 80s that giving birth in the hospital became a form of privilege and status quo. The same trend that also led many parents to think that trusting the formula million dollar profit companies was/is a better idea than trusting our bodies, when it comes to feed our children.

In my experience of 10 years as birth worker, I have often wondered: is Homebirth safe?

Nine out of ten times my answer has always been yes!

First and for most, the type of care that comes with birthing at home is simply day and night compared to the prenatal care that is provided by OBGYNs. This is partially due to their limited time and large practices, but it is also linked to the type of education they receive during medical school. Have you ever asked your OB hoe many homebirths they have assisted and witnessed during their residency?

You’ll be very surprised to find out that most of the time, OBGYNs have never seen a homebirth take place in real life! And most of their knowledge is deeply rooted in the idea that birth is an event that needs to be planned, monitored and controlled, hence mother and baby will not be safe.

I recently attended a birth of a second time mama whose birth required nothing but patience. While mom knew that her baby would be sound and safe at home, she had doubts surrounding the day of her birth because she really liked a specific day of the month that she had mentally picked for her daughter.

As the day progressed and the list of things we tried ‘to make birth happen’, we resigned to the idea that baby has actually chosen the next day as her birth day.

With that acceptance, came the opportunity to give this family space and privacy. Lauren, the midwife, decided to head home since she lived close by and I offered to disappear into the guest room and stay close by, just in case mom needed me during the night.

As soon as I thought I could possibly take a snooze, dad came rushing down the stairs shouting that mom was pushing.
We quickly called Lauren to head back and helped mom settle back into the tub, where she was planning to welcome her baby.
As soon as we were all ready, mom started to push her baby gently into the world. She took her time allowing her body to stretch and giving her baby the chance to enter this realm with ease and calmness.

Dad announced the head was now visible and help his wife by supporting baby’s head and gently bringing her above the water and on mama’s chest as she emerged from the water of life.

When women are given the opportunity to birth on their own terms, it is.

When birth is respected and seen as a normal even of life, it absolutely is.

Birthing at home is and should be an experience that every woman and family can choose consciously and responsibly. To make it safe what we mostly need is the chance to be listened and trusted.

What we desperately all need is not so much a skilled physician – though is the case of a true emergency there is absolute value to that too- we just need someone witnessing our power. Someone who can testify and tell us that we can do it.

We can birth our babies at home safely.